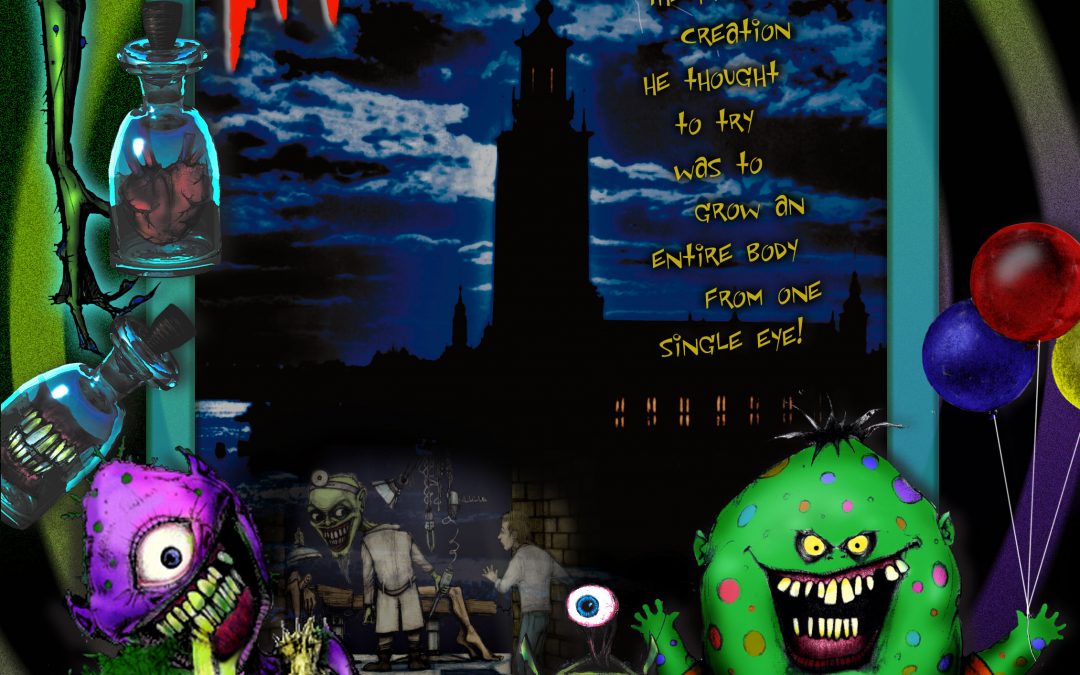 Put them together and call them by name – collectible tradable monster building brains out game!

Created by Michael PACE with Monsters by Dan Burton.

You’ll never forget that first night… You were watching television, it was late, there wasn’t really anything on… and then the doorbell rang. Odd, you thought, who would be dropping by at this hour? Not thinking, you opened the door and BANG… Your life will never be the same!

You found yourself frozen in fear standing in front of a three armed, one eyed monster. Oddly enough, you didn’t feel threatened. He reached out and handed you a tattered manuscript notebook and then suddenly dissolved into slime at the base of your front door, with the exception of his eyeball, which remained, staring at you…

The manuscript opened in front of your face. Hovering in mid-air it read…

Embed: Start at:
MonsterLab_sizzle_pace
“watch the video sizzler”
You’ve been chosen to save the world from a terrible fate
Make up your mind before it’s too late…

Evil monsters are loose, they’re ugly indeed
Roaming under my castle in abundance like weeds…

I am Dr. Stein and they’ve torn me apart
They’ve left me in pieces with no place to start…

But fear not, ’cause beneath my castle and inside my lab
You’ll find good monsters in need of rehab…

With courage, collect the clues along your way
I’ve left them for you in the words that I say…

The world is at stake so be on your way
Pick up the eyeball and save the day!

You looked down at the slimy eyeball and it looked back at you. You looked over your shoulder at the television you were watching, and with a shrug picked up the eyeball and put it in your pocket. A power bolt flew through your window, lifted you off your feet, and carried you to the castle of Dr. Stein.

Evil monsters roamed the land around the castle. You knew instantly what you must do. Get inside the castle, find Dr. Stein’s Lab and Book of Monster Formulas. Find monster pieces and build monsters of your own in hopes of defeating the evil Dr. Von Gersdorf before his monsters take over the world.

Gather your pieces, gather your wits, gather your friends. Meet in the castle and get to work, for time is short and there’s a lot of bad monsters to defeat. 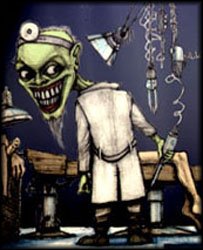 OFFICIAL MEMBER OF THE GOOD MAD SCIENTISTS ASSOCIATION
Expelled from the Lithuanian School of Genetic Engineering in Venaltranziazaraklopskia for mixing and matching the cadaver parts of humans and animals and performing rhinoplasty on his colleagues while they slept. He was voted least likely to succeed, and has won several demerits and dis-honors. He was pronounced certifiably insane for his belief that an entire living creature could be spontaneously generated from a single eyeball, and that lawyers are actually caring human beings!

He soon showed them! He couldn’t find a sympathetic lawyer anywhere but he did succeed in generating spontaneous life from a single eyeball!

He now runs a very successful “Monsters Made to Order” business from his castle in the hills of SLEEPY TOWN, where one can place an order for their own personal monster! His most frequent request is for domestic servants and middle management entertainment executives. He has also developed the “Ethical Advocate model #202” a “lawyer substitute” popular for use in government lawsuits. It’s been rumored that he is now moving into plastic surgery and is planning to open up his practice in Brentwood, California. He apparently has discovered a substitute for silicon.

However, his life changed drastically, one day when one of his own lab experiments went awry. But that’s ANOTHER story for another day…

Aunt Eeta
She’s mean and stinks like an old lady. She might give you some old cookies or sugarless candy that can increase your vitality, but don’t get too close or she’ll pinch your cheeks and kiss and hug you till you die!

UnDoo Yamonsta
The only monster Dr. Von Gersdorf had to lock up, this guy is so dangerous because he can destroy any monster with the UnDoo Goo that spews out of his head! UnDoo has a good heart, and will help you if you free him from his shackles, or happen to have a Panic Button.

VacuBats
Kamikaze bats that fly and stick to your face making it impossible to see where your going.

Gate Keeper
Was the assistant of Dr. Stein, now he’s yours. Protects you and the Laboratory from the bad monsters. He’s the baddest, strongest, smartest and most honorable of all the good monsters.

Balloon Boy
Wants to be your best friend but oozes and smells rotten. Follows you around the corridors talking constantly. His balloons and pustules contain noxious gasses that will make you fall asleep if they burst.

Mikclops
Devours anything, ANYTHING in his path. Watch out he’ll eat you alive. But don’t forget, he loves HammerHeads, and might even be your friend if you give him one!

Georgann
She’s able to morph herself into the monster part your looking for, be careful not to accidentally pick her up and bring her to the lab. She’ll destroy everything. The only way to tell if its her is by her color.

HammerHead
Watch out if you go exploring in the forest. HammerHeads hide in the trees and blend in, making them really tough to find! They’ll jump out and tackle you and steal your monster pieces to bring back to Dr. Von Gersdorf!

Fununda Bugs
Subterranean parasites which come to the surface and travel in packs to attack and overcome their victims. Now running rampant in the labyrinth.

Pseudomorphs
Watch out for this guy! He’s big, he’s tough, and he’s heavily armored and lives deep in the Labyrinth. He won’t stop till he finishes you off, or you finish him. You can’t run away either, ’cause he can transform himself into almost anything and follow you wherever you go!

Skukachucks
Part spider, part bat, part Elvis. Flies or walks around the labyrinth doing terrible impersonations. He’ll spin webs to catch you and will suck your life points. Also if you’re captivated by his song he’ll lullaby you to death.

Dan the Goalie
Keeps you from passing through doorways and achieving your goals, if contact is made, life essence is drained.

When you first enter Monster Lab, you will have to create a character.

First, you will be given a face and will be able to change the appearance and look of the face and personalize it to look however you want. You can change the nose, the eyes, ears, mouth, hair color and style, etc. This will be what other players see your character as, and your face will appear in the character portrait box along with the rest of your body.

After you have chosen the perfect look for your character, you will be given a list of 6 attributes and 25 bonus points to raise these attributes as high as you can until you run out of points, all attributes begin at 25. The 6 attributes are:

Strength: Controls how much your character can hold and carry at once (not the amount of items in your inventory!), and how involved your attacks will be with melee weapons (Swords, knives, fists, feet, biting, scratching, hair pulling, etc.) are.

Intelligence: Determines how well characters develop new skills, and how well you are able to create monsters that won’t just fail (just not work and basically be a waste of good monster parts), or backfire (attack you).

Vitality: Determines how many life points a character begins with, and how fast you gain new ones, plus controls how quickly an injured character regains health points after a battle.

Life: Life points control how much damage you can take from attacks or other painful things, like falling or being mashed with a great big falling rock, before you die.

After you choose and raise your attributes, you’ll then get 25 bonus points to choose a few skills your character will start with. Some skills will cost more the better they are. Some starting skills are: Punching (5 points), Kicking (5 points), Slashing (10 points), Dodging (15 points), Monster Making (20 points).

Lastly, you gain some new collectable pieces. All items are added to your Inventory, and all skills are added to your stats. For every duplicate skill you get, it automatically adds 5 points to that skill. If the skill level is over 50%, it adds 2 points. Duplicate items are kept in your Magical Sac and the you may keep, trade or sell the extras you have when you begin playing.